The Other Life - Shooter Jennings

The Other Life - Shooter Jennings 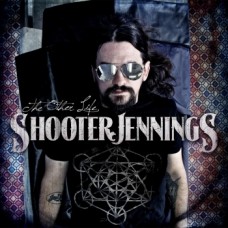 Make no mistake about it, Shooter Jennings has never been one to allow expectations, boundaries, genre or ideals dictate the direction of his art. From the moment he burst onto the scene, it was clear that he had a style and a vision all his own that would separate him from the leagues of cookie-cutter artists out there.

Over the duration of 2012, Shooter finished work on The Other Life, and Shooter and long time video-collaborator Blake Judd began planning an expansive film counterpart to the album. Shot across Tennessee, Kentucky, Nevada and California, The Other Life film paints a story of isolation, temptation and rebirth through visual storytelling.

As an album, The Other Life sees Shooter using all the colors of the pallets of previous recordings, and bringing them together to make his most diverse and interesting album to date. He enlists the help of friends and icons alike, Austin Texas madman Scott H. Biram shares vocal duties on the Steve Young penned The White Trash Song, Patty Griffin blesses Wild and Lonesome and Black Oak Arkansas Jim Dandy preaches alongside Shooter in the Black Oak Arkansas lost gem 15 Million Light-Years Away.

Tags: The Other Life Shooter Jennings