Plays Well With Others - Lera Lynn

Plays Well With Others - Lera Lynn 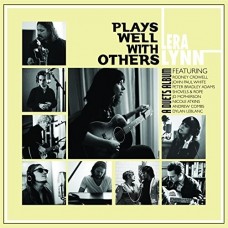 Throughout her career a nearly decade-long run filled with three album releases, a career-shifting appearance and soundtrack for HBO's True Detective, hundreds of shows on both sides of the Atlantic, and a sound encompassing everything from Americana to stark indie rock Lera Lynn has balanced her fierce independence with a string of collaborations.

On her fourth album, Plays Well With Others, she teams up with eight different duet partners and seven co-writers, resulting in her most diverse, collaborative work to date.

Plays Well With Others is a unique duets album one in which nearly every song is completely co-written and co-sung. Peter Bradley Adams, John Paul White, Dylan LeBlanc, Andrew Combs, Rodney Crowell, Shovels & Rope, JD McPherson, and Nicole Atkins all make appearances, working alongside Lynn not only to perform these songs, but to create them, too.

With Plays Well With Others, Lera Lynn cements her own identity as both creator and collaborator. On an album filled with Grammy winners, country icons, folksingers, and Americana heroes, it's still her star that shimmers the brightest, shining light on the newest phase of an eclectic, ever-expanding career.