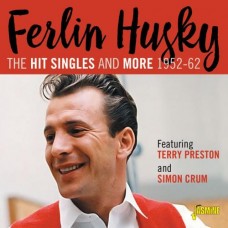 This 31-track set presents a unique career overview of the versatile, velvet-voiced Ferlin Husky and includes all his early hits, as both Terry Preston and Simon Crum. A handful or so of these sides are impossible to find elsewhere on CD, making this a must-have for fans.

Ferlin Husky pursued three separate singing careers. He is of course readily known as the smooth Country-Pop singer who topped the C&W charts with A Dear John Letter, Gone and Wings Of A Dove, in a hit-studded career which yielded him fifty chart records between 1953-75.

But before that he was known as Honky-Tonk singer Terry Preston, while during his "Glory Years" he would also frequently morph into Hillbilly hayseed Simon Crum, his hugely-popular alter-ego who would register hits of "his own", like Cuzz Yore So Sweet, A Hillbilly's Deck Of Cards and Country Music Is Here To Stay.