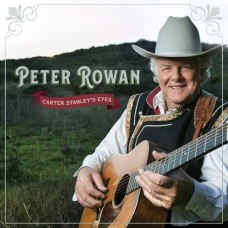 Peter Rowan was just a young bluegrass boy when he caught the attention of Bill Monroe, who made him an actual Blue Grass Boy in 1963, or maybe '64. Rowan isn't certain exactly when he became the band's guitarist and lead singer, but the moment Monroe introduced him to fellow icon Carter Stanley is etched in his memory just as indelibly as the inked entry in his 1966 diary.

Within a few months, Stanley would be gone, but the impact he and his brother, Ralph, had on Rowan - and the world - would grow even stronger. He acknowledges their influence, and finally gives the story of that meeting a definitive telling, with his debut Rebel Records release, Carter Stanley's Eyes.