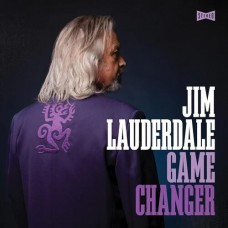 At any given time, you're likely to find Jim Lauderdale making music, whether he's laying down a new track in the studio or working through a spontaneous melody at his home in Nashville. And if he's not actively crafting new music, he's certainly thinking about it.

This may be a surprising sentiment from a man who's won two Grammys, released 34 full-length albums, and taken home the Americana Music Association's coveted Wagonmaster Award. But his new album Game Changer is convincing evidence that the North Carolina native is only continuing to hone his craft.

Operating under his own label, Sky Crunch Records, for the first time since 2016, Lauderdale recorded Game Changer at the renowned Blackbird Studios in Nashville, co-producing the release with Jay Weaver and pulling from songs he'd written over the last several years.

"There's a mixture on this record of uplifting songs and, at the same time, songs of heartbreak and despair-because that's part of life as well," he says. "In the country song world especially, that's always been part of it. That's real life."