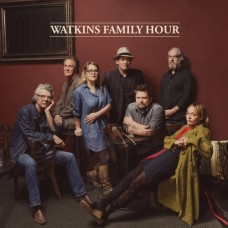 Watkins Family Hour, recorded live over three days in the studio of their friend and producer-engineer Sheldon Gomberg, captures the freewheeling spirit of the collective's live shows. An all-covers affair, the album additionally includes Sara leading vocals on the Grateful Dead's Brokedown Palace, Sean essaying Roger Miller's wistful Not In Nottingham (from Disney's 1973 animated Robin Hood), and Apple singing Where I Ought To Be, originally performed by Skeeter Davis.