All My Memories Fit For Print [Hardback Book] - Mac Wiseman 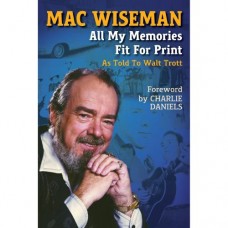 Since infancy, he's suffered an impaired leg from Polio, but Mac Wiseman had too much backbone not to succeed. He worked twice as hard as other Appalachian farm-boys, then went on to get an education and carve out a career in show business: First as a broadcaster, then as musician for pioneers Buddy Starcher, Molly O'Day, Flatt & Scruggs and Bill Monroe, and finally as a solo singer, hitting his stride with ballads about "Davy Crockett" and "Jimmy Brown The Newsboy."

Wiseman achievements include induction into the Virginia Music Hall of Fame, Bluegrass Music Hall of Honor, Country Music Hall of Fame, and National Medal of the Arts. Mac's devotion to duty, however, cost him dearly on the home-front, though a strong faith helped him be the survivor he is today in his ninetieth year!