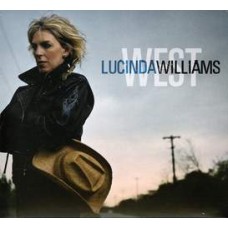 West is the ninth album release from alt.country diva Lucinda Williams. Lucinda's by now notoriously slow writing pattern means that her many fans have to wait a long time for new releases, but they are always worth waiting for, and West is no exception.

Williams' rootsy, cracked drawl is the defining sound of West, and Lucinda applies her unique phrasing to a number of heavy subjects, with mortality becoming a common thread (her mother's death inspired a number of the tracks on West). There is a similarity in writing style to Dylan's Time Out Of Mind, and a similar amount of self-analysis going on.

West is probably the least rocking album since Lucinda's early Happy Woman Blues days and in those terms is no Car Wheels, but the resulting mix here is a sublime example of production bringing out the quality of vocals and lyrics rather than production overwhelming fragility.

Heavy subject matter with barely a nod in the direction of commercial considerations, but a classic in the making.