Two Men With The Blues (with Wynton Marsalis) - Willie Nelson

Two Men With The Blues (with Wynton Marsalis) - Willie Nelson 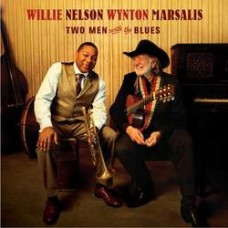 The event was simply billed as 'Willie Nelson Sings the Blues,' but the historic two-night stand on January 12 and 13, 2007 at Jazz at Lincoln Center was far more than that. Call it a summit meeting between two American icons, Willie Nelson & Wynton Marsalis, two of the most significant figures in modern-day country and jazz, who discovered common ground in their love for jazz standards and the blues. Their performance stirred the sounds of New Orleans, Nashville, Austin and New York City into a brilliantly programmed mix that was equal parts down-home and cosmopolitan, with plenty of swing and just a touch of melancholy. To say that these shows were a hot ticket would be an understatement. Luckily, the tapes were rolling and the results of this unique collaboration now constitute the Blue Note album Two Men With The Blues for everyone who couldn't cram into The Allen Room. Featuring great playing from one of the hottest bands around these classic tracks are given new life by the extraordinary dual talents of Willie Nelson and Wynton Marsalis. At a time when most people are thinking of retirement, Willie has never been busier. His profile has been high in recent weeks with his various career retrospective releases and sold out tour and this album can rightly stake it's place alongside anything else he has done. Wynton rarely sounds so relaxed and both of these musical giants are clearly having the time of their lives together on these new interpretations of some of the greatest songs of the 20th century.