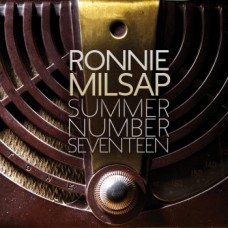 Before winning six Grammy Awards and placing 40 singles atop the country charts, Ronnie Milsap was an all-American boy, discovering his potential as a musician while growing up and having fun like so many other teens in North Carolina. Milsap's new album, Summer Number 17, is a tribute to those golden years as only he could tell it - through song.

In more ways than one, Summer Number 17 is wrapped in layer after warm layer of carefree nostalgia and takes listeners back to Ronnie's favorite tunes, from pop standards (It's All in the Game, Mack the Knife) to early rock and roll classics (Mustang Sally, Personality, Tears on My Pillow) all the way to iconic R&B songs (Georgia on My Mind, made famous by Milsap's idol Ray Charles, and Motown classic What Becomes of the Brokenhearted).

The album is bookended by the newly-written title track, an ode to those carefree days of teenag eadventure, and a new recording of Milsap's nostalgic No. 1 hit from 1985, Lost in the Fifties Tonight.