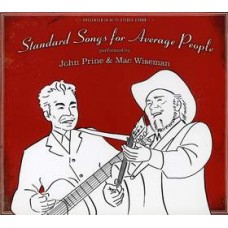 Cowboy Jack Clement is who we have to thank for pairing blugrass hero Mac Wiseman with folk stalwart John Prine on Standard Songs for Average People . The twosome have come up with an album of charming classic country songs, ranging from the gospel hymn The Old Rugged Cross through to Tom T Hall's Old Dogs, Children, and Watermelon Wine via some Elvis, Kristofferson, Patti Page and more.

The album works because Prine and Wiseman want it to - no matter that they choose to add in the Grand Ole Opry's Carol Lee Singers to the mix alongside John Prine's well worn vocals and Wiseman's tenor. The songs were chosen by the two singers, and work because these are cuts that they both wanted to record.

The producer is David Ferguson (Johnny Cash) and he has assembled a cast of the finest musicians to bring the project to life, including Pat McLaughlin and Jamie Hartford, Kenny malone, Dave Jaques and steel guitar legend Lloyd Green.