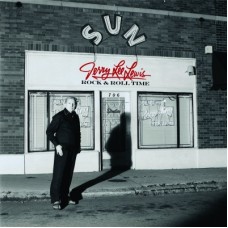 Originally co-written and recorded by Kris Kristofferson in 1974, Lewis' version of the title track features an all-star lineup, including guitarists Doyle Bramhall II, Jon Brion and Kenny Lovelace and vocalists Vonda Shepard and Bernard Fowler. Overall, Lewis says the track is emblematic of all of the LP's 11 tracks. 'This is a rock & roll record,' he says. 'That's just the way it came out.'

The selection of songs draws from the catalogues of Chuck Berry, Bob Dylan, Lynyrd Skynyrd, Jimmie Rodgers and even a track by one of his Million Dollar Quartet buddies, Johnny Cash, one of two songs that finds him playing guitar. 'My wife stepped in and asked me to do that one,' he says. 'Johnny Cash was just one of the finest people in the world. He's a great guy. I have lots of fond memories of Johnny.'