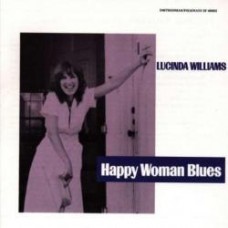 Probably a major surprise to Williams' fanbase that she picked up with Car Wheels On A Gravel Road in 1998, but this stripped-down acoustic album reveals her eye for detail that was evident even then. Lucinda disappeared for nine long years after this album was released, making her comeback with her eponymously titled album in 1989.

This was the first recording to establish Williams as a songwriter of note, and the liner notes on this 1990 re-release offer a passionate glimpse into the mind and career of this gifted artist.