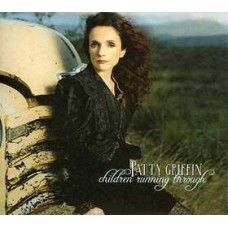 Children Running Through is the 2007 album release from Patty Griffin, one of the most individual and unique performers around. Patty Griffin's stunning voice and deep lyrical imagery is this time around given a more sparse and economical backing. The rich textured sounds of previous releases 1000 Kisses and Impossible Dream have given way to an atmosphere approaching the acoustic intensity of Living With Ghosts.

Officially slotted into the folk-rock category, the legions of committed fans will testify to the maze of classic and modern folk, gospel R&B, heavy rock and Americana that Patty Griffin's career has taken them through. Children Running Through never veers into the electric excesses of Flaming Red, for example, but there are more demanding in-your-face tunes on here than in recent albums.

Children Running Through sounds as though in some whay the shackles have been taken off, and it is clear that Dave Matthews' label ATO have been magnificently supportive of Patty Griffin, allowing her the creative freedom such a free spirit needs to explore new musical avenues and ultimately blossom.

There are many highlights on the album; Trapeze, a resonant ethereal ballad with Emmylou Harris adding her own inimitable harmonies; Up To The Mountains, a moving gospel anthem recently covered by Solomon Burke on his Nashville CD; and the closing cuts Someone Else's Tomorrow and Crying Over which stylistically owe something to the 1000 Kisses sound.

Patty's voice has the range and texture to convey more emotions than most of us can comprehend, and her songs have depths that only the most complete writers can offer. Children Running Through may well be the album to break Patty Griffin out of the cult worship status and into the mainstream, but regardless, it is certainly another major milestone in the career of this amazing talent.