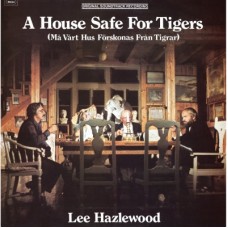 Re-mastered from original master tapes. A House Safe For Tigers is the soundtrack to one of the seven TV movies Lee Hazlewood made with the director Torbjorn Axelman during his period living in Sweden in the early 1970s.

Hazlewood had moved there to lay low and to help his son avoid the draft, but wound up finding happiness and creative freedom. Many of the albums recorded in Sweden made their way no further than Scandinavia, but of them all, A House Safe For Tigers is the holy grail for collectors, often changing hands for hundreds of dollars.

Originally only available in Sweden, this marks the first time Tigers has been reissued and available the world over. The movie was a 'semi-documentary' featuring Hazlewood and his friend Axelman, looking back to childhood and contemplating the meaning of life. In it, Hazlewood runs a marathon, tells anecdotes about a bum who cured his stutter and convinces a group of Swedish children to take sides against Richard Nixon. It's strange, very strange, Hazlewood said, But we meant it to be strange.'