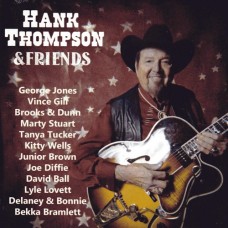 Although not as prominent on the top country charts in later decades, Thompson remained a recording artist and concert draw well into his 80s.