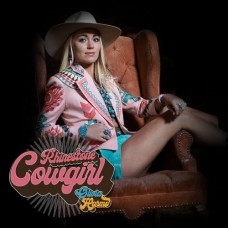 Olivia Harms was born Western Music royalty, but the rhinestone cowgirl stepped out on her own to craft a sound that is equal parts Bakersfield, Texas, and Nashville country.

The daughter of Western Music Hall of Fame member Joni Harms, Olivia grew up on a 150-year-old farm in Canby, Ore., and made her first appearance on stage when she was two days old. Her mother had labor induced so she wouldn't miss her show. Twenty-six years later, Olivia is following in her creative bootsteps.

Olivia's album Rhinestone Cowgirl is produced by D. Scott Miller, and the 11-song collection calls out to the cowboys, name-drops George Strait, swings through Buckaroo territory and packs plenty of twang and steel guitar. Olivia co-wrote every song.

"I was going for a very traditional country vibe, but with some Bakersfield and of some country-western swing to bring back honky-tonks."” Olivia explained. "I think it boiled down to very traditional '90s-style country."