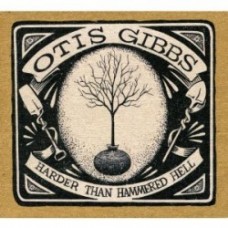 Harder Than Hammered Hell, is Otis Gibbs' sixth album and the fourth release on Wanamaker Recording Company. The album title came from experiences Otis had when he worked as a tree-planter. Much of what he learned came from a seventy-something year old friend and co-worker. The man would describe ground that is too hard to dig as 'harder than hammered hell.'

He would also use the phrase when referring to a difficult job, or a particularly tough person. Otis found it a fitting metaphor for the difficulties of leading a creative life.