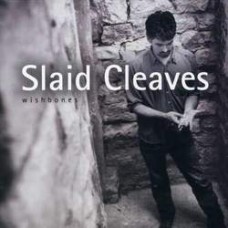 With Wishbones, Slaid Cleaves turns up the volume. His third album features all the strengths that have drawn him a loyal following as one of America's most acclaimed singer-songwriters. The songs remain literate, emotionally vivid, and concisely colorful. Only this time, they make you move.

After three years of steady touring, Cleaves decided he wanted to make more of a band album, one that rocked harder than the acoustic-based songs he'd previously recorded. Terser and punchier than past work, yet still packed with the same emotional weight and clever wordplay, Wishbones proves Cleaves is a versatile artist capable of swagger as well as sensitive insight. The strong narratives and character-driven stories are filled with moments of reckoning. 'Some of these songs are about people facing something difficult, like we all do from time to time,' Cleaves says. 'There's a certain drama in those times of your life that are turning points.'

He wrote most of the songs while hiding out in a country cabin, away from his usual routine. 'I've written each album in a different way,' he says. 'It seems I need to shake things up a bit to get the ideas flowing. I don't know what I'll do for my next record, but I'm sure I'll have to do something unexpected, something new, to make it work.'