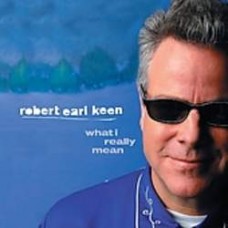 Possibly one of the most criminally underrated songwriters and performers is Texas' own Robert Earl Keen, and on his 2005 release What I Really Mean Keen gets the chance to demonstrate yet again his ability to paint the colourful characters in his stories set against outstanding country flavoured acoustic rock driving music.

Robert Earl Keen's fascination with the everyday life of regular folk, and his ability to bring them to life with a few, well chosen words puts him alongside celebrated writers like John Prine, but the same level of critical acclaim continues to escape him. On What I Really Mean REK's lyrics are a constant joy as he plays around with words and phrases, and tugs at the heart strings with his stories of being on the road, but constantly wanting to get back home.

REK's voice has never sounded better, with his Texan warmth added to the consistently excellent guitar arrangements on What I Really Mean, courtesy of his guitarist/producer Rich Brotherton. The music has country in its heart; not the country-pop that leads to mainstream acceptance, and not the traditional honky-tonk that appeals to the purists, but the sort of road-trip country that sounds best coming at you from a car radio on a long, easy open highway drive.

The devilish fun closely associated with this cult figure is much in evidence - check out the lyrics to The Great Hank, or just marvel at the slightly deranged tale of A Border Tragedy. Essential listening for the legions of Robert Earl Keen fans.