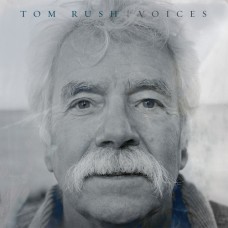 Tom Rush's Voices is the CD that fans of modern folk music and contemporary singer-songwriters have been waiting for 50 years. Well known for his golden ear for significant new songs by little-known writers, the New England-based singer-guitarist, one of the last giants of the early '60s folk boom, was among the very first to record future standards by then-fledgling performers Joni Mitchell, James Taylor, Jackson Browne on 1968's The Circle Game.

On that album, he staked his own claim as a major writer with No Regrets, an instant classic and subsequent chart hit in multiple genres by other artists, and one of less than two dozen top-notch Rush originals that would tantalizingly surface on his eleven studio albums.

Tom's new Voices is the first album of his 55-year-plus career consisting of all Rush-written songs, ten relaxed, tenderhearted, amused and sometimes thoughtful songs that perfectly reflect Tom's wry persona. Harkening back to Rush's early '60s roots in Boston as a folk/blues interpreter are two traditional tracks, Corina, Corina and the opening Elder Green included because "I didn't want to compromise my folksinger credentials," Tom explains.