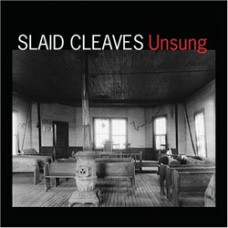 On Unsung, Austin singer-songwriter Slaid Cleaves delivers a treasure trove of songs from some of his favorite writers

Inevitably, Cleaves' own compositions make up the bulk of his set, and recorded works. However, he has always been known for throing in the occasional song by a hero or friend, by way of a tribute to his influences and to give his set or CD some context and variety. This was the premise behind the recording of Unsung, where the somngwriters are often undiscovered, and all lesser-known than deserved artists. The tracks on Unsung are poignant stories, strikingly similar to Cleaves' own songs, relating lovers and underdogs struggling to win. Cleaves brings these stories to life with the same eloquent grace and grit that have made his past recordings so valued.

The work of producers David Henry and Rod Picott on Unsung is worthy of particular mention. The production and understated instrumentation provide an evocative and captivating backdrop to some excellent performances. Slaid Cleaves' gift as an interpreter of songs is a new addition to hi already formidable array of talents.