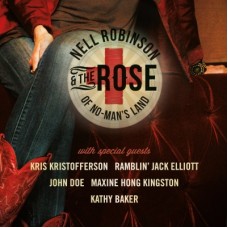 Nell Robinson is a singer/songwriter who has been described variously as 'a modern-day Patsy Cline' and one of the 'freshest voices in roots music.' Her crystalline vocals have been compared to early Emmylou Harris, Dolly Parton and Hazel Dickens and when she applies her vocal charm to the songs she writes that tell the stories of her family's deep history the musical results are nothing less than utterly captivating.

On The Rose Of No-Man's Land, Nell reaches into her family's deep military history to create musical vignettes of her ancestors' experiences. Produced by Grammy-winning producer Joe Henry, the new songs weave together stories from the Revolutionary War to the present, inspired by 250 years of letters, stories and poetry from Nell's rural Alabama family.