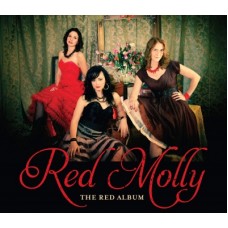 On their album The Red Album, Red Molly delivers their edgiest CD to date, with a wildly cool collection of songs. Previously perceived as a straightforward three-part harmony Americana/Folk trio, the band takes a distinctive shift towards darkness with the new indie collection. Think 'Mazzy Star with a twang,' and you may get a sense of the ethereal, sometimes even unsettling quality the women evoke in the buzzworthy album.

The trio, which celebrates its tenth anniversary in 2014, is comprised of Laurie MacAllister (bass) Abbie Gardner (dobro) and Molly Venter (guitar).The Red Albummarks the trio's first Nashville-produced album with Ken Coomer (original drummer for Wilco & Uncle Tupelo). Coomer shook things up sonically, putting Abbie Gardner's dobro through effects for a few songs. He also had Molly Venter use six different guitars on the album - including an electric.