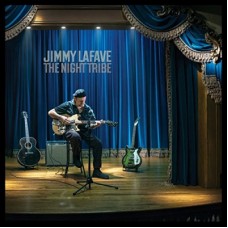 A few versions of Jimmy LaFave & the Night Tribe have existed over the years, but he'd never reflected life 'in the neon glow of perpetual sin' via song until now, with The Night Tribe, his new album.

Explaining the term's origin, LaFave says, 'In Oklahoma, you hear the word tribe a lot because of all the different Indian tribes, and I thought, 'What tribe of people am I part of' It was always the night people.' After reactivating the Night Tribe name for a recent European tour, he decided he wanted to do something thematic with it. 'And that is when I write most of my songs,' he adds.

'Almost all the songs on the record were written at night-time, driving.' While hardly dark in texture, LaFave's self-produced album captures the varied moods and musings of an accomplished folk/Americana artist known for possessing what critic Dave Marsh has called 'one of America's greatest voices.'