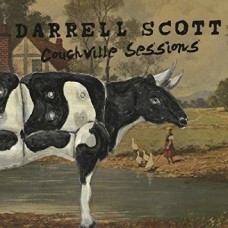 Darrell Scott recorded the songs on The Couchville Sessions fifteen years ago and is only now releasing them not because they're something inferior that he cast aside. On the contrary, he's releasing this album because the songs were too good to remain silent.

He also held off on releasing the album until he could get a few extra touches he always wanted on these songs - a Guy Clark guest spot here, triple fiddles there, a Peter Rowan vocal here. 'These songs have really stood the test of time,' he says. 'They still move me'.

The five member band includes Scott along with steel guitar virtuoso Dan Dugmore; Kenny Malone, offering his unparalleled percussion; one of England's most acclaimed musicians, Danny Thompson, playing his famous double bass; and Bill Payne (Little Feat, Bob Seger) on piano and organ. There are also guest musicians such as Shad Cobb, guest vocals by folks like John Cowan and Peter Rowan, as well as a treasure of a spoken monologue by the great Guy Clark.

Except for a small addition here and there - stirring background vocals by Andrea Zonn and Jason Eskridge, for example - the entire record was recorded live in Scott's living room out on Couchville Pike, the road that gives the album its name.