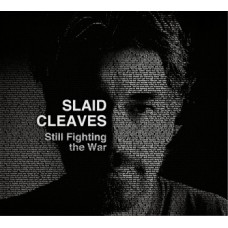 When Slaid Cleaves wrote the title track for his new album Still Fighting The War, he had a specific subject in mind. Inspired by a Pulitzer-winning series of photos on an Iraq War veteran suffering from PTSD, he sought to address the plight of those returning from war and struggling to readjust to society. But as the album progressed, the phrase 'still fighting the war' began to take on a broader meaning.

While many of the songs on Still Fighting The War focus on struggle and pain, the album, as a whole, is far from morose. Much like Hank Williams or Woody Guthrie, Slaid juxtaposes tales of working class woes (Rust Belt Fields, Welding Burns) with lighthearted wittiness and tongue-in-cheek humor (Whim of Iron, Texas Love Song), adding a sense of optimism and resilience that turns sad stories into a source of inspiration instead of despair.