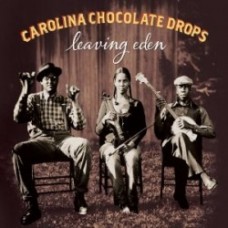 On this 15-song collection, recorded live in the studio with all the players in a single room, the Carolina Chocolate Drops illustrate their own adaptability to grow and change. Following the amicable departure of founding member Justin Robinson, band mates Rhiannon Giddens and Dom Flemons recruited three exceptional new players for the recording and expanded their repertoire to incorporate more overt blues and jazz elements and straight-up folk balladry alongside brilliantly rendered string-band tunes.

Robinson's replacement on Leaving Eden is Hubby Jenkins, a Brooklyn-bred guitarist, banjo player, and singer who had previously busked his way around the country. Joining the revamped trio in Miller's studio were beat-boxer Adam Matta and New Orleans-based cellist Leyla McCalla.