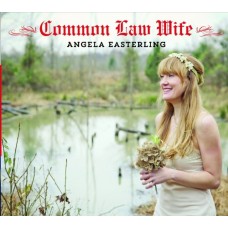 Angela Easterling's new record Common Law Wife is due for release August 14, and is something of a coming-of-age album. Her fifth studio effort, it has a very deliberate theme in mind that is plotted carefully over the 12 tracks. A country/americana darling and Greer, South Carolina native, Common Law Wife sees Angela embracing the life afforded to her, coming to a number of personal realizations with a sense of maturity and acceptance.

On the title track, which is appropriate for its naming of the record given its centerpiece role, she laments her promise that she would never get married, coming to terms with the fact that after unexpected pregnancy and resulting co-habitation she is now a common law wife. 'I was raised in church each Sunday, got a fine college degree, you'd think I'd learned my lesson 'bout those birds and those bees,' she sings on the track. 'Well we wake up each morning when we hear that baby cry, too busy changing diapers now for walking down the aisle.'

Common Law Wife is a wonderfully cohesive, brilliantly crafted and beautifully sung record that draws on traditional country, Americana and folk music to deliver a host of timeless songs. If Angela Easterling was celebrated before, then this record is sure to help the cause. ~ For The Country Record