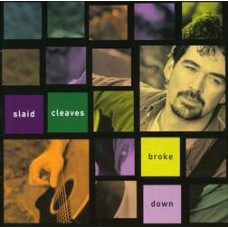 Broke Down in Slaid Cleaves' own words:

'In the winter of '99 I was putting the songs together for this album, and the material I had written was all pretty bleak. There was the ghost of a rancher, a dying lumber jack, two dead miners, a divorced couple, a couple about to break up, and a couple that never quite got together, plus a couple of guys who are so far beyond depressed they're into defiance and then some. I thought, well, either I need to write some happy stuff to balance this record out, or I need to just go with the dark stuff.

'Nashville's Hallmark greeting card writers pump out 'uplifting love songs' (publishers said that over and over while I was up there - that's all they were interested in). And pop is full of adolescent angst and irony, which is fine for all the 16-year-olds. When's the last time you saw a video that told a story of being down, being broke, struggling, facing death Well, I thought, there's my niche.'