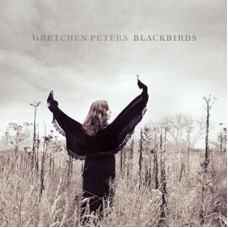 Fresh from her induction into the prestigious Nashville Songwriters Hall of Fame, Gretchen Peters unveils her new album Blackbirds. Co-produced with Doug Lancio and Barry Walsh and recorded in Nashville, the album features a who's who of modern American roots music: Jerry Douglas, Jason Isbell, Jimmy LaFave, Will Kimbrough, Kim Richey, Suzy Bogguss and more.

But it's not the guests that make Blackbirds the most poignant and moving album of the Grammy-nominee's storied career; its the impeccable craftsmanship, her ability to capture the kind of complex, conflicting, and overwhelming emotional moments we might otherwise try to hide and instead shine a light of truth and understanding onto them.

In an atypical and unexpectedly rewarding move, Peters teamed with frequent tour-mate Ben Glover to co-write several tunes on the new album, which evokes the kind of 1970's folk rock of Neil Young, David Crosby, and Joni Mitchell that Peters grew up on, albeit with a more haunted, country-noir vibe simmering just below the surface.