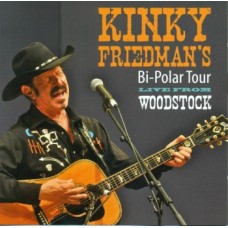 Bi-Polar Tour: Live From Woodstock by Kinky Friedman was recorded live at The Bearsville Theater in Woodstock NY on Kinky's East Coast Bi-Polar Tour, which took place in the spring and summer of 2012.

The album features some of Kinky's best songs (many of which have not been recorded live before this album release) as well as some of his best jokes and stories which you cannot hear anywhere else or on any other album, including The Ballad of Kevin Barry, a song which the Kinkster has never before performed live or recorded.