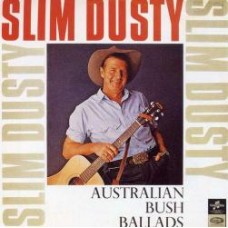 This man has been making music and epitomizing the spirit of Australia for 50 years. Although he had a massive worldwide hit with 'A Pub With No Beer' in the late '50s, few outside his home country are aware of the continuing popularity and reverence in which Dusty is held Down Under, not only by the public but by his fellow musicians and artists.

45 years ago in Australia, Slim Dusty and EMI celebrated Slim's 33rd birthday with a historic debut 33rpm LP release: Slim Dusty Sings. This was one of the first ever Long Play releases by an Australian artist and there was no way anyone would have anticipated that Slim Dusty would have gone on, not only to release 18 albums just in the decade of the '60s, but also continue on to release a remarkable 100 plus albums over the following four decades of his career.

On the eve of what would have been Slims 78th birthday, EMI Australia here releases for the first time on CD six of Slim Dusty's classics albums from the 1960s. These historic CD releases commemorate Slim's hugely successful '60s era (12 Gold LP's) and the 45th anniversary of his debut. Slim is truly the voice of the nation, the chronicler of Australian history in song. EMI. 2005.