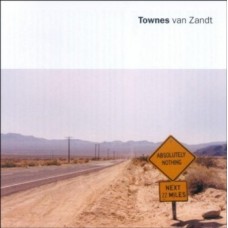 All the ups und downs of Townes Van Zandt's career from the 1968 debut For A Sake Of the Song to the last concerts in the mid-90's are well documented. However, there are still some gems of the Texas troubadour to discover like Absolutely Nothing, a compilation of unreleased studio and live recordings.

For a long time Townes van Zandt performed the Pogues' gem Dirty Old Town only on stage, but then in September 1996 Townes and his fellows Royann and Jim Calvin recorded the folk classic at Flashpoint Studio in Austin, Texas. Recorded only on one track, the minimalist poem with mandolin und violin is nearly as touching as the unforgettable Kathleen. The poet of the hopeless at the end of his life: disoriented and helpless he sings these covers as if they were his own songs.

All other five studio recordings on Absolutely Nothing are as beautiful and sad as Dirty Old Town, which is now for the first time available on CD. The other 12 songs were recorded live in 1994 at McGrory's' in Culdaff, Ireland. The concert shows Townes van Zandt at his personal best. He played his classics and the lesser-known songs No Place To Fall and Snowing On Raton and at the end of the album we are witness of a good-humoured Townes van Zandt telling the 'Penguin' joke and the 'Three Shots Of Gin' joke.