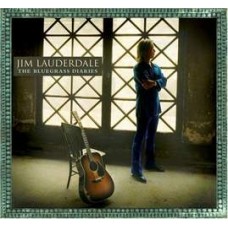 Fresh off of a 2006 Grammy nomination for his last bluegrass album Bluegrass and an earlier Grammy win in 2002 for his album Lost In the Lonesome Pines with Ralph Stanley, country music's most prolific songwriter Jim Lauderdale is back again with his next batch of high and lonesome hallmarks. The Bluegrass Diaries is the first of three albums the Nashville legend will release of the course of the next year. After releasing two albums in 2006, the man Nashville has come to know as the quintessential 'songwriter's songwriter' is still constantly writing, recording and collaborating, resulting in this legendary output of top notch gems. Music seems to flow from the very pores of the man who has penned hits for some of country music's most chart-topping superstars including The Dixie Chicks, George Jones, George Strait, Vince Gill and Patti Loveless. The Bluegrass Diaries picks up where Bluegrass left off allowing Lauderdale to indulge in his passion for intricate picking and foot stompin' with his friends. The album includes Jesse Cobb on Mandolin, Richard Bailey on Banjo, Jay Weaver on bass, Cody Kilby on guitar and Aaron Till on fiddle as well as many other special guests. On The Bluegrass Diaries Lauderdale blends bluegrass chops with his signature turn of phrase. At root, the album is a metaphor for Lauderdale's entire career; switchblade-sharp, honest and starkly American. Digipak.

1. This Is the Last Time I'm Ever Gonna Hurt
2. All Roads Lead Back To You
3. I Wanted To Believe
4. Looking For a Good Place To Land
5. Can We Find Forgiveness
6. Chances
7. One Blue Mule
8. Are You Having Second Thoughts
9. My Somewhere Just Got Here
10. It's Such a Long Journey Home
11. Ain't No Way To Run