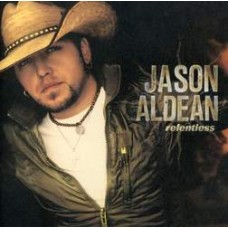 THE NEW ALBUM RELENTLESS now brings more of the aggressive spirit that singled him out as one of the break out artists of the last year. The first single Johnny Cash is off to a tremendous start at radio. In the first 2 weeks following the ADD date over 70% of the Country radio monitored panel was already playing it. With 3 Top 10 singles and 3 #1 charted videos at CMT Jason has knocked down the walls of the gate keepers and we are confident that the growth that has already occurred will not just be maintained but will shift into an even higher gear as this song continues to climb the charts. The goals for this release are high but when you consider that you know you have a million fans out there that have already purchased an album of Jasons music it is not a huge leap to get to the next level given all the activity that Jason brings to the table. 2007 will be a significant year for Jason Aldean and his label, Broken Bow. Any past success that has been attained is not being taken for granted and all the assets of the company are being utilized to insure that every opportunity to promote Jason and this album are being explored and capitalized on. Now hes preparing to drop his second album, a collection of songs that sustain his emphasis on relatable, recognizable lyrics while pushing into new sonic territory. The standout tracks include Laughed Until We Cried, Do You Wish It Was Me, I Break Everything I Touch and Grown Woman featuring a special guest vocalist.