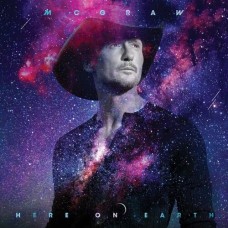 Here On Earth is the 2020 release from country music superstar Tim McGraw, and includes the single I Called Mama.

Tim McGraw has sold more than 50 million records worldwide and dominated the charts with 43 worldwide #1 singles. He's won 16 ACM Awards, 14 CMA Awards and 3 Grammy Awards. His iconic career achievements include being the most played country artist since his debut in 1992.