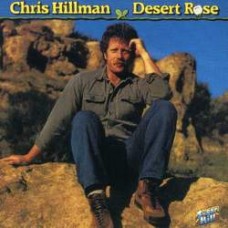 During three decades as a musician, Chris Hillman has played almost every style of music imaginable. He is a folkie who wound up in the Rock 'n' Roll Hall of Fame. He is a journeyman sideman who wound up singing lead on 10 top-10 country smash hits.

He is a bluegrass mandolin picker who detoured to three Gold Records in rock bands. He is a self-taught composer who wound up cowriting some of the cornerstone songs of the country-rock repertoire.

The longtime sideman finally stepped out on his own in the early 1980s. Morning Sky, from 1982, and Desert Rose, from 1984, became the most cricitally acclaimed solo efforts of Hillman's career to date. Both were returns to the honest, uncluttered country sounds of his boyhood; and both featured the contributions of banjo player/harmony vocalist Herb Pedersen.