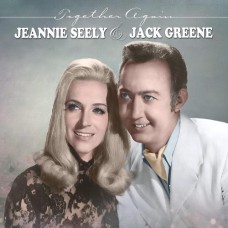 During the 1970s Jeannie Seely & Jack Greene were one of the most popular country music duos with their uptown road show that was more Las Vegas than down-home country. The pair were both enjoying successful solo careers when they began performing duets on the Ernest Tubb TV show. Both signed to Decca Records, their first duet single, Wish I Didn't Have To Miss You, reached number two on the country charts in early 1970.

This 15-track album, Together Again, features both solo and duet recordings that the pair made for transcription discs that the US Military used for recruitment purposes. They were usually 15-minute programmes that were sent out to radio stations with the performers singing their latest hits and extolling how patriotic it would be for young men and women to join the army, air force or navy. These were usually recorded with either the performers regular band, or occasionally utilising Nashville's A-team studio players. The result is a fresh-sounding record from another time … throwback music that's a nod to both Jeannie and Jack's best-known songs with a few surprises thrown in for good measure. ~ alancackett.com