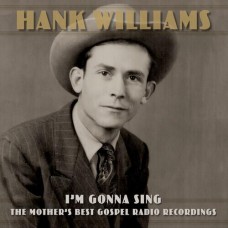 Hank Williams' career was brief and incendiary. Most of those fortunate enough to have seen him in concert say that he was a captivating performer. Now, sixty years after his passing, we finally get a sense of Hank Williams onstage, adding another dimension to our scant knowledge of him. Still popular today, he's a giant in American music.

The performances heard on I'm Gonna Sing: The Mother's Best Gospel Radio Recordings were recorded on acetate discs (meant to be played only once or twice) that were shelved in 1951, and they gradually faded from common memory. In the 1970s the acetates were saved from the trash by a WSM employee and eventually given to Hank’s daughter, Jett. On behalf of the estate, Jett fought an eight-year battle to establish ownership, finally winning the right to release these recordings in partnership with Time Life.

"There's magic in these radio shows, meant to be ephemeral and now captured for eternity, like a soap bubble preserved in a box. The result is a prismatic view of an iconic performer."