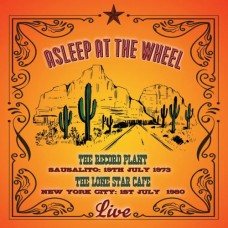 Asleep at the Wheel is an American country music group that was formed in 1969 in Paw Paw, West Virginia by Ray Benson and Lucky Oceans. They soon found themselves opening for the likes of Alice Cooper and Hot Tuna and, after being mentioned in Rolling Stone magazine by Van Morrison, they landed a record deal with United Artists leading to the release of their debut album Comin' Right at Ya in 1973.

The band has won eight Grammy Awards and released over twenty albums with more than 21 singles on the Billboard country charts. There have been countless personnel changes over the years but founder member Ray Benson has remained at the helm throughout. These recordings are taken from radio broadcasts of concerts in 1973 and 1980.