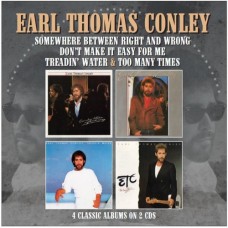 Earl Thomas Conley was one of the most successful country singers of the 1980s. His eighteen Billboard No. 1 country singles during the 1980s marked the largest number of #1 hits by any artist in any genre during that decade. This collection of 40 tracks from four complete albums provides plenty of opportunity for listeners to agree that country music really doesn't get better than this.

Tags: Somewhere Between Right And Wrong Dont Make It Easy For Me Treadin Water Too Many Times Earl Thomas Conley