Kickin' Out The Footlights ... Again - George Jones and Merle Haggard 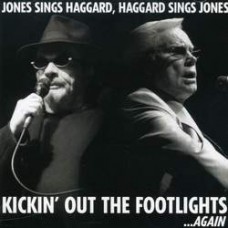 Nashville, TN (Bandit Records) - Iconic legends and superstars George Jones and Merle Haggard recorded an album together for the first time in almost 25 years. The old friends and touring buddies are planning to go into the studio this summer to pay tribute to each other. Jones recorded five of his favorite Haggard songs and Haggard recorded five of his favorite Jones songs. In addition to harmonizing on each other's songs, they also recorded several duets, including the title song of the album, Kicking Out The Footlights...Again, which Haggard penned. Produced by KEITH STEGALL (Alan Jackson and George Jones) the contains many of the two music industry legends' most well loved tunes including ''She Thinks I Still Care,'' ''Silver Wings,'' ''The Window Up Above'' and ''The Way I Am.'' The last time we recorded together was 25 years ago, and though we've both changed a lot over the years, our love for real country music and respect for each other has only gotten stronger, ' Jones said from his Franklin, TN. house. ''The fans want to hear Hag sing a Jones song and me sing one of Hag's.'' Recognized as two of the only authentic country interpreters left today, Jones Haggard have a long history of occupying iconic positions not only in country music's legacy, but pop's as well. They have influenced virtually every country music artist who has come along in the last 50 years and every bar band in America sings Haggard and Jones nightly. Haggard just completed several dates opening for The Rolling Stones and Bob Dylan, and Jones has been celebrated by everyone from Keith Richards to Harry Connick, JR.