For You To See The Stars - Radney Foster

For You To See The Stars - Radney Foster
Sale 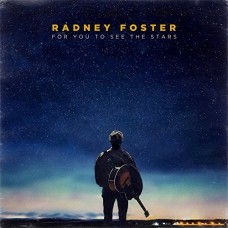 Legendary singer/songwriter Radney Foster found commercial success and critical acclaim due in large part to his literary approach to country music. Known for penning dozens of Top Forty, Top Twenty, Top Ten hits for both himself and Nashville's elite, he felt driven to tell stories longer than the three minutes allowed for radio.

For You to See the Stars is a testament to his talent, showing the diversity of his voice, bringing lyrical prose to the page, and presenting Radney Foster to a whole new audience. The CD of the same title, includes the ten songs that inspired these stories.

Radney Foster is a profound songwriter. When he hasn't been delivering his own vocals to songs he's written, he's been offering his prolific writing chops to some of the biggest names in Nashville and Texas.

Foster has only gotten better with age, and that's readily apparent on his latest offering, For You to See the Stars. This time, he's going against the grain of typicality by releasing both an album and a book of the same name. They've inspired each other, and Foster says it's up to you to decide which art form inspired the other first.

Tags: For You To See The Stars Radney Foster