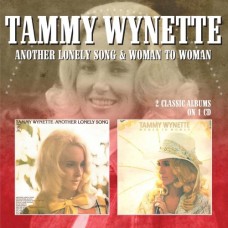 Tammy Wynette, known as the "First Lady of Country Music", was one of the music's truly iconic figures. This much beloved entertainer - during a twenty-seven year recording career - saw the release of 42 studio albums and charted 73 singles.

By the time the two albums in this collection were released, producer Billy Sherrill had developed a distinctive styling for the hit-making singer, with her "sob in the voice" heightening the emotions of songs' lyrics, perfectly blending in with the smooth musicianship and string arrangements and backup vocals by The Jordanaires.

Both albums were released in 1974 and each was headed up by a hit single. Another Lonely Song gave the singer her 14th No. 1 solo chart single. The album also included covers of three already proven country hits Satin Sheets, Keep Me In Mind and Help Me Make It Through The Night.

Seven months later came Woman To Woman with its Billy Sherrill penned title track reaching No. 4 in Billboard's Country Singles Chart and offering another touch of home-spun feminine advice. Once again, the album presents songs from many of the most respected writers in the business - Dave Loggins' Please Come To Boston, Mickey Newbury's I Don't Think About Him No More and Shel Silverstein's For The Kids, the last revealing that this one-time Playboy cartoonist was more than just a humourist.