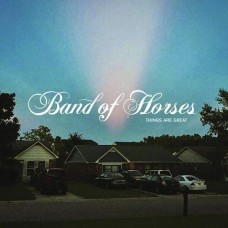 2022 release, the sixth studio album by Band of Horses and their first record in more than five years. Sonically Things Are Great is a return to their earlier work and the kind of raw ethos that lies at the heart of Band of Horses.

This time around Band founder Ben Bridwell took a bigger role in production than he ever has previously, producing or co-producing every song on the album. He brought in old collaborators including Grandaddy's Jason Lytle, Dave Fridmann, and Dave Sardy, but it's not just old friends who were able to help Bridwell achieve the sound he envisioned. For the first time he worked with engineer Wolfgang "Wolfie" Zimmerman. The two had an instant connection which can be felt throughout the record.