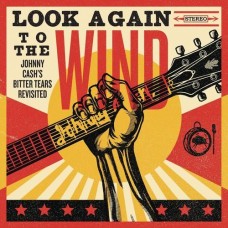 Of all the dozens of albums released by Johnny Cash during his nearly half-century career, 1964's Bitter Tears: Ballads of the American Indian is among the closest to the artist's heart. A concept album focusing on the mistreatment and marginalization of the Native American people throughout the history of the United States, its eight songsspoke in frank and poetic language of the hardships and intolerance they endured.

Now, 50 years after it was recorded, a collective of top Americana artists has come together to re-imagine and update these songs that meant so much to Cash, who died in 2003. For Look Again to the Wind: Johnny Cash's Bitter Tears Revisited, creative leader and album producer Joe Henry (Bonnie Raitt, Aaron Neville) realized that the Bitter Tears album held a special place in Cash's canon, and that in many ways the issues it raised still resonate today. This had to be apparent in the new versions he was recording.

The album was recorded in Los Angeles, Nashville and at Johnny Cash's personal recording studio, Cash Cabin in Hendersonville, TN.