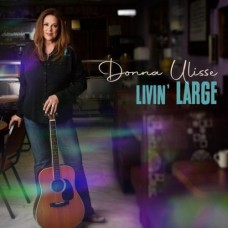 Billy Blue Records is set to release its' second album by Donna Ulisse. Livin' Large is a mix of original material written or co-written by Donna with Doyle Lawson, Becky Buller, Rick Stanley, Jerry Salley and Rebekah Long. It also includes a gospel cover of a Loretta Lynn song and songs written by Buddy Cannon, Dean Dillon and Bud McGuire.

This will be Donna’s third album produced by bluegrass legend Doyle Lawson.