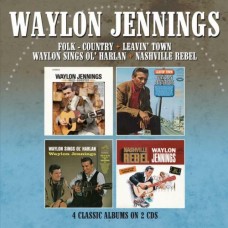 These four Waylon Jennings  albums on two CDs were recorded between 1966 and 1967. Folk-Country, Leavin' Town, Waylon Sings Ol' Harlan and Nashville Rebel are available for the first time in this format.

Album three featured Kentucky-born songwriter Harlan Howard's songs. Howard had moved to Nashville in June 1960, and had become Waylon's most chosen songwriter during his early days, the collection includes standards like Busted and Heartaches By The Number as well as songs also recorded by Buck Owens.

Waylon's career took an additional boost when he was selected for the lead role in Nashville Rebel, a Country music movie with a big budget for the time, it even possessed a plot (albeit slight), the fourth album here features songs from the soundtrack.