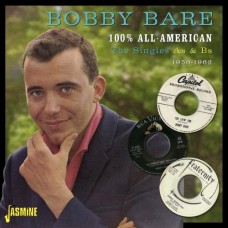 Country music legend Bobby Bare almost had a #1 pop hit in 1958 without anyone knowing, his song about Elvis Presley's rise to fame and induction into the US military The All-American Boy charted while Bare was himself in the Army and unable to promote it. Released under the name of his friend Bill Parsons (who DID promote it!) it was a global hit and reached #2 on the US Hot 100.

Parsons never had another hit, but once he got out of the Army and got his career back on track Bare scored 70 Country chart hits between 1962 and 1986, several of which crossed over to Pop.

Jasmine's collection brings together five years' worth of recordings from the 1950s and early 60s that Bare released on various labels, before he finally 'made it' under his own name in 1962 (naturally enough, including The All American Boy).

100% All American shows that the talent was there right from the off, and that it would only be a matter of time before that permanent breakthrough came with Shame On Me (also included here).

Remastered from the best possible sources with detailed annotation on the early years of this future Country giant, it is a collection that no fan of vintage country, pop or rock 'n' roll will want to pass up!